The first and second versions of Simon Boccanegra are separated by almost a quarter of a century. The 1857 version of the opera, a political work with dark tones and a complex plot, did not gather positive feedbacks from the audience on the occasion of its debut at the theatre La Fenice in Venice. Giuseppe Verdi managed to revive its fate on the occasion of the reruns in Reggio Emilia, Naples and Rome by personally altering many dramaturgical and musical aspects; but it wasn’t until its second version – entrusted to the revision of Arrigo Boito and performed at La Scala on March 24 of 1881 – that the opera finally reached its success. Concerning the first version, Giuseppe Martini stated: “the problem was not the performers, but the color of the work, considered gloomy and severe, with unmemorable melodies and an ensemble that is not immediately striking […]. In the 1857 version, there was deliberate research of effects, of visual and musical effects in parallel, such as the well-known play of lights and music when Boccanegra enters the Palazzo Fieschi at the end of the Prologue (the famous letter to Piave “If I were a painter, I would certainly make a beautiful scene, simple and of great effect”). Such novelties didn’t pay off at first listen and, eventually, the reruns in Venice, Rome and Reggio Emilia had the best reception in a few weeks […]. The first Simon Boccanegra is the flagship work of an avant-garde that has yet to arrive and, for such a reason, it has the melancholy and fragile beauty of misunderstood things “.

The rarely-staged 1857 version can be finally appreciated in its critical edition, integrating Verdi’s latest autographed findings. “I was able to work on a musicologically-detailed text, with more information than those available so far – stated Riccardo Frizza. “Obviously, the first thing to do was to compare them: trying to identify not particularly – or exclusively – the musical differences. Instead, I was interested in the understanding of how Verdi’s hand had changed. His intentions. Especially in the remaining parts or identical as text, or similar enough for musical ideas […]. I consider Simon Boccanegra as his most important work. Not to make a ranking of absolute value, but to underline how much Verdi has been able to look ahead of his time – for me, this is the opera that musically prepares Othello the most – researching with courage and deviating, almost detaching himself from his very same way of writing music”.

A political drama on power and the wearing mechanisms it generates, lowered into a metaphorical dimension in the staging directed by Valentina Carrasco: “A port atmosphere (similar to the one in Genoa or to any other large harbor) summons a stark social context where concrete conditions arise for a popular revolt against a patrician elite […]. But, in the exploration of the port areas, it appeared as evidence that often, up until the recent past, slaughterhouses and industrial slaughterhouses were nearby […]. And suddenly, we were faced with a disturbing landscape: the unconscious and submissive herds of cattle going towards death following the herd, mass butchers who, accustomed to giving death without the slightest ritual, no longer have an appreciation of life and kill without any sense of horror. All of this made us think of the oppressive atmosphere of the Verdian drama, creating a framework in which its dark plot can unfold in a natural way.” A gloomy picture, a scenario of cruelty where the figure of Amelia stands out, leading to an ending that, despite its tragic nature, seems to dissolve the climate of hatred that rages throughout the story. Yet, the director states: “in the beautiful finale of the opera, perhaps some dissonance is perceived, some inevitable pessimism that Verdi’s acute spirit cannot keep at bay. Is this a new beginning, or a repetition of the same cycle of adoration by a new leader? “ 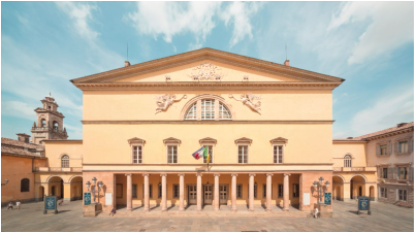