“In recent years, a thesis has been gaining ground among critics and musicologists that Baroque opera could become the musical theater of the future – emphasizes director Stefano Monti, who also designs the sets and costumes – also because of the fact that seventeenth- and eighteenth-century dramatic theater has a timeless emotional strength. (…) Despite being built around historically relevant characters, the work in question is characterized by its timelessness. Everything revolves around passions, even madness, the sublime mixes with the terrible, beauty with brutality… they are nothing more than the continuous oscillation between the high and the low of life”. The historical pretext is as such as the Ottoman Empire’s sultan Bayezid I and the Mongol conqueror Timur, who captured him at the Battle of Ancyra in 1402; but “Il Tamerlano, or the Death of Bajazet” – a “pasticcio” based on a libretto by Agostino Piovena in which Vivaldi’s pages and materials borrowed from other composers and other titles converged, as was the practice of the time – is a triumph of inaction dominated by passions. A monolith reminiscent of Kubrick will stand out on the stage to pursue the poetics of Baroque “wonder” but also the sense of a timeless space.

“Being a ‘pasticcio’, this score is obviously characterized by a marked stylistic variety, but Vivaldi’s writing is easily recognizable compared to the style of the authors involved, namely Broschi, Hasse and Giacomelli – explains Ottavio Dantone, at the head of Accademia Bizantina, which celebrates 40 years of rediscovering ancient and Baroque repertoire and prestigious achievements all over the world. – Vivaldi the opera composer is still often underestimated: certainly in his production the compositional urgency and a certain ‘entrepreneurial’ character emerge, but his skill in writing with seductive melodic, harmonic and rhythmic solutions remains evident… it gives us an extremely connotative vision of the theatrical taste of the time. Philology is not just about dealing with the correctness of embellishments, articulations or the use of ancient instruments. It is above all the knowledge of the customs and needs not only of expressive but also often practical theater of the Baroque era.”

In this new production, the Baroque dimension of the title also emerges from the re-proposal of the encounter between puppet theater and melodrama – an encounter that already took place in seventeenth-century Venice, where San Moisè was the first lyric theater for puppets; over time, musicians such as Vivaldi himself composed for puppet theater. The inclusion of dance also has philological justification, in the “dances” mentioned in the original libretto (although there is no evidence of a corresponding musical score).

In this case, the work of the DaCru Dance Company focused on the need to make the singer and dancer a single entity, with the first representing the physical body and the second the subtle body, the space of resonances… through a non-conventional language, thanks to the Urban Fusion training of the performers: Kyda Pozza, Davide Angelozzi, Elda Bartolacci, Graziana Marzia, Sara Ariotti, and Alessandra Ruggeri.

The three-act opera – on this occasion presented in the critical edition by musicologist Bernardo Ticci, with the variations introduced by Dantone himself – contemplates the greatness and decline of an Empire with which the Republic of Venice had to deal for much of its history. However, the historical context is less relevant than the opposition between the defeated and the winner, the prisoner and the jailer. Bajazet, entrusted to Bruno Taddia for the first performance on Saturday, January 14th and to Gianluca Margheri for the Sunday repeat, chooses death rather than remain in the power of his enemy, Tamerlano, played by Filippo Mineccia. Enhancing and complicating the drama are two women: Bajazet’s daughter, Asteria (Delphine Galou), whom Tamerlano wants to marry despite her already loving Andronico (Federico Fiorio), and Irene (Marie Lys), whom Tamerlano intends to abandon in favor of Asteria. Between real and alleged betrayals, the (unheeded) advice of Idaspe (Andronico’s confidant played by Giuseppina Bridelli), disguises, metaphorical and not… the story spirals towards the inevitable conclusion: Bajazet’s suicide, whose death pacifies Tamerlano’s anger, returns Asteria to Andronico, and gives Irene the promised spouse. “A conventional happy ending that, by its intrinsic contradiction, leaves an epilogue open to many reflections – Stefano Monti notes again – This has determined the choice of a finale of the staging in which the end of a story and the break between performers and spectators were not produced, but rather placed both in the face of new questions.”

The Sultan Bajazet, imprisoned by Tamerlane, is freed by the Greek prince Andronicus. He would rather die than remain in the power of his enemy. He recommend to his daughter Asteria to love Andronicus. Idaspe urges Andronicus not to forget his empire because of Asteria. Tamerlane offers to restore Andronicus on the Greek throne if he obtains from Bajazet to grant him Asteria in marriage. Andronicus will marry the princess Irene, who has been promised to Tamerlane. Tamerlane asks Asteria to marry him. The young woman is shocked, suspecting that Andronicus, who she loves, is an accomplice in this project. Bajazet, surrounded by guards, enters with Andronicus. He opposes his daughter’s marriage to Tamerlane, even if this refusal cost him his life. Asteria accuses Andronicus of having betrayed her to recover the throne. Irene enters and she learns from Andronico and Idaspe that Tamerlane has decided to marry Asteria. Offended, she agrees to remain at court, pretending to be a messenger sent by Irene. Andronicus is desolate to have lost the love of Asteria.

Tamerlane informs Andronico that Asteria accepts his marriage proposal. Idaspe advises Andronicus not to protest so as not to endanger his own fate. Asteria tells Andronico that she accepted Tamerlane’s hand only because of his fault. Andronicus is desperate. The curtain opens revealing Tamarlane and Asteria reclined on cushions. Tamerlane rejects Irene and he enjoins her to return to her own realm. Asteria, left alone with her, lets her understand that a secret reason pushes her to accept this marriage. Irene, a betrayed fiancée, complains about her fate. Bajazet pours his anger on Andronicus, who he accuses of having become Tamerlane’s accomplice. Tamerlane and Asteria are seated in front of the army. Tamerlane arouses the wrath of Bajazet, who feels betrayed also by his daughter, not knowing the real reason why Asteria accepted the marriage. When the sultan threatens to kill himself, Asteria, showing a dagger, confesses that she accepted Tamerlane’s hand only to assassinate him. The latter, furious, orders that Asteria and Bajazet be executed. Irene, Bajazet and Asteria accuse Tamerlane of being a cruel monster.

Bajazet gives Asteria a vial containing poison, and they both do oath to die. Andronicus openly declares his love for Asteria to Tamerlane. Tamerlane, furious, threatens to kill all three. But before, Asteria will have to serve him at table under the eyes of Bajazet and Andronicus, witnesses of her humiliation. Asteria and Andronicus are reconciled and they prepare to die. Idaspe regrets that Andronicus lost his kingdom for a woman. Andronicus remains irremovable in his love for Asteria. Tamerlano mocks Bajazet for the splendor of his banquet, and orders Asteria to serve him a drink. Irene, having noticed that Asteria has poured poison into the cup of Tamerlane, stops him. She chooses this moment to reveal her identity. Tamerlane attempts to force Asteria and Bajazet to drink first, but Andronicus drops the cup from the hands of Asteria. Asteria and Bajazet are captured. Tamerlano agrees to marry Irene, who saved his life. Idaspe returns announcing that Bajazet has drunk the poison. Desperate, Asteria curses Tamerlane. Irene and Andronico ask Tamerlane to forgive her. Soothed by the death of Bajazet, he accepts. 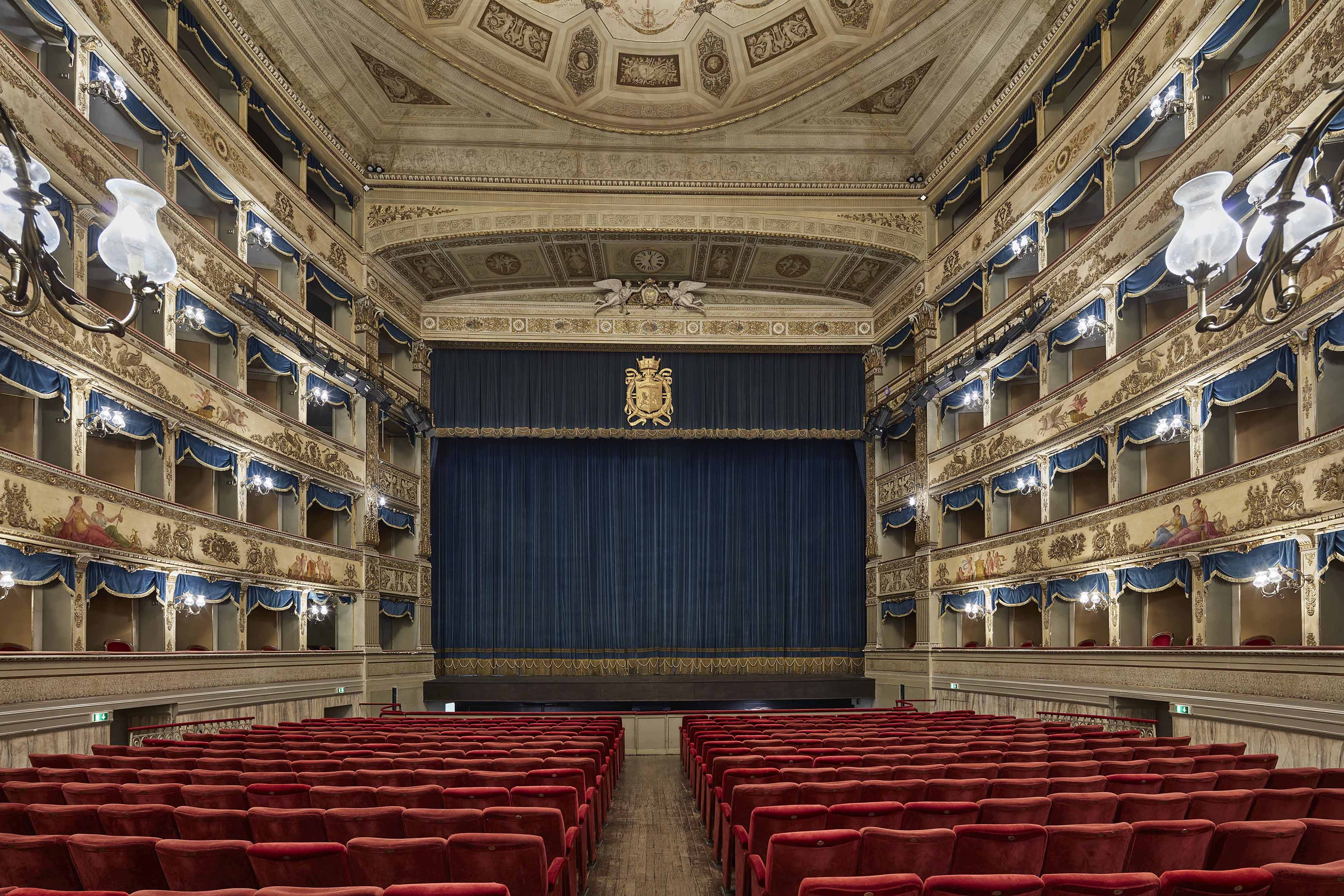 Early nineteenth century: after more than one hundred years of life the Communicative Theatre, made entirely out of wood, was collapsing and the Public Administration decided to build a new facility. The first step was to identify an adequate area: Piazzetta Degli Svizzeri, a squalid square surrounded by slums but placed at the very heart of the city, was the chosen place. In 1838, the project was entrusted to two architects from Veneto, the brothers Tomaso and Giovan Batista Maduna. The former had ministered to the restauration of La Fenice, the most famous theatre in Venice, which had been partially destroyed by a fire. Tomaso Meduna also signed the project of the first railway bridge connecting Venice to the mainland. Under the lead of the two architects, the building which resulted was a neoclassical structure very similar to the Venetian theatre. The apostolic delegate Monsignor Stefano Rossi suggested to dedicate the theatre to Dante Alighieri.